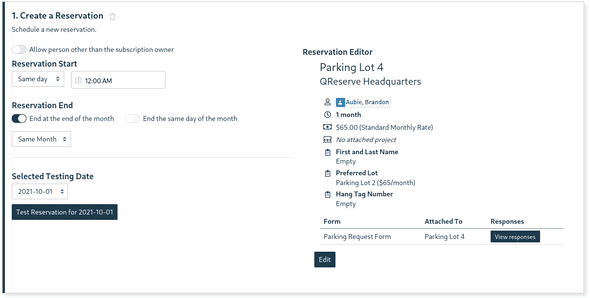 A reservation task sets up a template reservation to be created each time your subscription runs. When first added, a reservation window will pop-up to pre-fill in the desired reservation parameters such as resources, rates, and any forms. The reservation template can be edited by clicking on the Edit button anytime after the task is initially setup.

The start and end of a reservation is setup on the task card itself where you select the start and end times relative to the subscription date. For example, you if a subscription is scheduled to run on the first of each month to create a month long reservation then you can set the Start to be Same day and the End to be End at the end of the month (Same Month). This option will handle the variable number of days in each month automatically.

When run, a reservation will be attempted but could fail if there is a conflict or some other rule prevents the reservation being created.

Generate an Invoice from Earlier Tasks 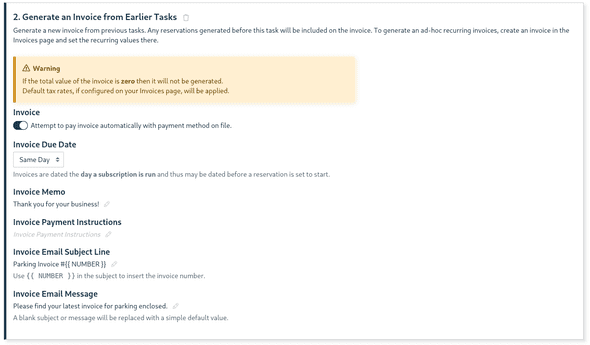 If your site has a payment processor with card-on-file capability you can optionally attempt to pay the invoice automatically at the time of creation. This allows for recurrign membership or subscription fees to automatically be charged to users! If a payment attempt fails then the subscription itself will be marked as failed and included in the failed notification email; however, previously succeeded tasks will still exist. For example, if a reservation for a parking spot was created but the payment for that parking spot failed, the user will receive an unpaid invoice and the reservation will still exist.

This task can simply be used to send an email to a specified email address. More flexibility can be unlocked by combining with a script that can return an object specifying specific recipients and content for the email based on context and rules.

Scripts are an incredibly powerful task that can take the input of previous tasks or trigger objects as context to generate content for emails or decide whether or not to continue on to additional tasks. For more information, please refer to the sneq developers documentation.